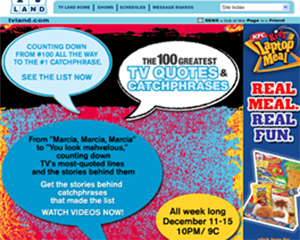 TV has become part of our daily lives. For quite a number, they can’t imagine life without it. They know their TV shows better than they do their spouse in some cases. In fact, they would know which TV character was speaking on their favorite show even if they can’t see the screen, usually by their catch phrases. Guess that’s why they call it the TV generation.
Well, TV Land has decided to make their list of the 100 greatest quotes and catch phrases. TV Land will be running a week long show, counting down the list til we get to the number one, most recognized catchprase (or quote). The show starts on December 11 and? runs til December 15.

Some of the phrases that have made it to the list are:

And the number one spot goes to….check out the show to find out who got the top spot. It may just surprise you.