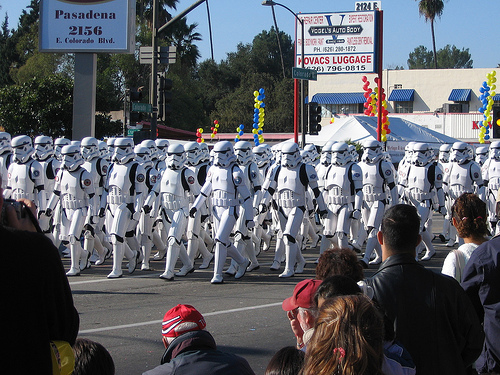 The annual Rose Parade is a much awaited event. This year’s parade was even more special. Dubbed the Star Wars Spectacular, it had George Lucas for its Grand Marshall and naturally Star Wars for its theme. It was very timely since 2007 is the 30th anniversary of the release of the very first Star Wars movie.
The parade had a float set as the moon of Endor with adorable Ewoks swinging around. Another float was dressed up as the garden planet of Naboo. What was probably the most interesting to many though were the 200 Storm Troopers marching along.

These troopers were not professional actors or entertainers. They were all fans, and they came from all over the world to form this very special part of the parade. The Storm Troopers were chosen from the 501st Legion, a major Star Wars fan club. The members of the legion are fans who dress up in Star Wars costumes for charity events and other activities. They were asked by George Lucas to take part and you bet that for them is already a singular honor. George Lucas shouldered the? cost of their flight, hotel and meals. You can bet these Storm Troopers are having a great new year.
George Lucas says that it was a great honor to be chosen to be the Grand Marshall. “It’s always a great honor to be put in a category with other people you admire,” he said. He joins the ranks of Bob Hope, Dwight Eisenhower and Bill Cosby just to name a few.