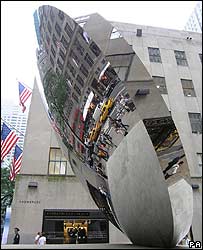 In Manhattan, a giant sculpture called the “Sky Mirror” was unveiled in Rockefeller Center. Weighing in at a hefty 23 tons and spreading 33 feet in diameter, the sculpture faces the famous Manhattan center at a 60 degree angle, placing it in the perfect position to “interact” (with the street life below) said the award-winning artist, Anish Kapoor.

Kapoor, who was born in Bombay, India has won numerous prestigous awards in the UK, most notably the Turner Prize in 1991 and was made CBE in 2003.

Known for his huge modern sculptures of this scale, Kapoor has created other similar amazing pieces, such as Marsyas, a crimson-coloured steel and PVC sculpture at the Tate Modern, as well as other sky mirrors, the first of which was on display in Nottingham, England. This particular one in manhattan has also been shown in various venues around the UK.
He has also the creator of “Cloud Gate” a steel sculpture in Chicago’s Millenium Park and has now been comissioned to create a memorial for September 11 victims in the memorial garden of Hanover Square near ground zero.? The piece will be called “Unity” and true to Kapoor’s style, it will measure 19.5 feet and be the centerpiece of the garden.