This weekend, the streets of Tokyo were packed with people in costume and shopfronts were adorned with witches and pumpkins – Halloween fever has hit Japan.

Although the Japanese have a similar Buddhist holiday in August known as Obon, which, needless to say is celebrated with as much joviality as a funeral, the Japanese know the holiday as an Americanized time to have fun and relish in it. After all, the Japanese are known for their fondness for fantasy role playing as seen in their habits for “cosplay”, which involves dressing up in anime costumes. 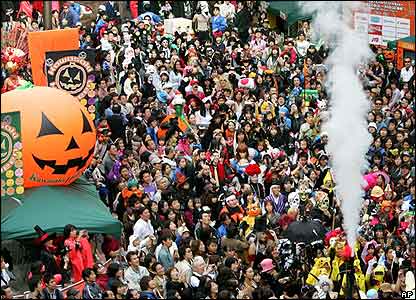 Halloween was probably first introduced in Japan in the early eighties, when Tokyo Disneyland opened its doors. Today, the theme park (which apparently is the most packed of all Disney parks around the world) started their annual Halloween parade even ahead of Florida’s Walt Disney World – as early as September 12th.

A recent survey reported that 3/4ths of the population in Tokyo know what Halloween is, and although the trick-or-treating tradition has yet to become a tradition, it is quite apparent that the holiday of horror has wormed its way into the heart of the Japanese people.

Also in the news:

Down and out in upscale Japan

The history of the comfort women still an issue in Japan

Japan could be destroyed within the next 100 years