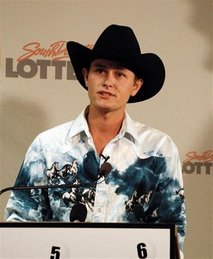 Everyone dreams of winning the Powerball. I even know some people who actually believe that they WILL win the Powerball one day, but I haven’t met a single person who has actually won. But check this out, a 23-year-old rancher from Todd County in South Dakota has won the most recent Powerball draw; and his winnings? A mere $232 million. He will be taking home a whopping $88.5 million (after taxes) as a lump sum.

Neal Wanless’s story is something like a modern day fairy tale. He is 23-years-old, a young rancher trying to make a decent living. His father has been buying and selling scrap metal in the recent years in order to survive. Neal bought $15 worth of lottery tickets at a town called Winner, and guess what? He became one himself! Big time.

What’s he going to do with the money? In an interview Neal said that he would expand their 320-acre ranch, repay the townspeople who have shown him and his family kindness over the years, and not squander his money.

That sounds really good. It cannot be denied, however, that lottery winners have encountered problems when dealing with their newfound wealth. While I am not saying that Neal will burn his money away like many other lottery winners, I really am hoping that this young man and his parents, with whom he lives, will be able to handle the rollercoaster ride that is life after winning the lottery.

It looks as if he has a level head on his shoulders, though, doesn’t he?