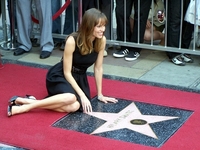 It is a moment that any individual would be proud to have – their own star on Hollywood boulevard. Hilary Swank is definitely over the moon that her star has now landed on the walk of fame.

Swank says she still remembers when she arrived in LA with her mother, Judy. They only had $75 to their name. Her mom made calls to various agents using the payphone, telling them that they should hire Hilary. It all paid off.

Hilary Swank has come a long way from “The Next Karate Kid” where she first appeared. She is now a two time Oscar Award winning actress – the first she got for “Boys Don’t Cry” and the second for “Million Dollar Baby”. She hasn’t let the awards go to her head though and continues to be a hard worker.

The actress hasn’t allowed herself to be boxed into any particular stereotype which has been to her advantage. She has shown true versatility and Hollywood has recognized that she truly is a star.