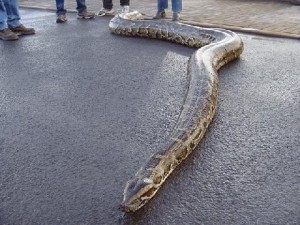 Where do these pythons come from (as it is highly unlikely that they traveled all the way from Burma)? Apparently, pet owners dump them in the glades once they get tired of them. And since the conditions in the area are conducive to breeding, the snakes have multiplied over the years.

Aside from the fact that pythons are ungainly (at least to the average person), they pose a danger to the natural balance in the Everglades. Pythons eat just about anything and endangered species like the wood stork and Key Largo woodrat are in extreme danger. More so, the bigger snakes can eat larger animals like bobcats and deer and in fact, scientists have already found these animals inside the bellies of captured snakes.

If you think that no one is doing anything about the problem, think again. The Obama administration has already allotted $200 million so far to projects aimed at restoring the glades. While naturalists and environmentalists are rejoicing over this, there are those who think that the money should be spent on other more practical things. On the other hand, the glades and its preservation cannot be given a price, don’t you think?

The next time that you get tired of your pet python, you should think twice about throwing it out in the glades.