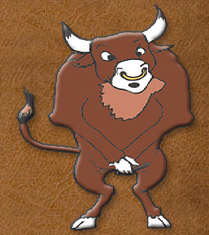 Or maybe two? Well, the Oakdale Testicle Festival is the event to go to. For the 28th year in a row, people from all over can have all the balls that they want, cattle’s balls, that is.

Every year, for the past 28 years, the Oakdale Rotary Club has been involved in this festival, in an attempt to raise funds. In its early days, the festival was called the Calf Fry, with only the Rotary Club behind it. In 2003, however, the Cowboy Museum joined in. This year, it’s going to be held on the 30th of March.

So what is in store for participants of the Testicle Festival? Ever heard of mountain oysters? Well, that’s the specialty of the event. For the price of $50, you can get a ticket to a sit down dinner of bull testicles. (Tickets go for $65 at the door.)

About 400 pounds of gonads are chopped up and prepared for the event. The recipe, of course, is a secret, but seems to have people coming back for more. Mountain oysters seems to be a catchy name but I am unsure as to how actually eating them would sit with me.

Participants of the festival swear by their tastiness, however. Christie Camarillo, fore example, swears that they are simply delicious. She is the executive director of the Cowboy Museum. She goes on to say that they taste like a mix of fried calamari and chicken liver. Everything exotic tastes like chicken anyway, right?

Anyhow, if you’re interested in having a ball yourself, give this number a call: 847-5163. (Oakdale, California)