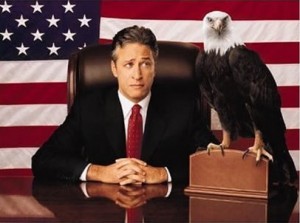 News anchor icon Walter Cronkite passed away this month, and it is but inevitable that people would look for the next news personality to take his place. Well, maybe not literally but figuratively speaking. If Walter Cronkite was known for one thing, it was that he was the man that all of America trusted when it came to the news. Now that he is gone, who does America trust most?

Time conducted a poll with this exact question: “Now that Walter Cronkite has passed on, who is America’s most trusted newscaster?”

If the figures are to be believed, Jon Stewart has gained the trust of the American people. Now don’t get me wrong – I love watching Jon Stewart do his thing on TV. Indeed, I rarely watch TV but on the rare occasion that I do, I find myself watching this “newsman.” The interesting thing about this, though, is that Jon Stewart is primarily a comedian and not a news anchor!