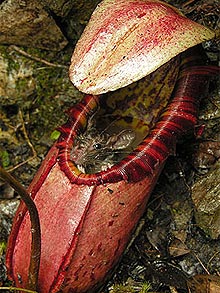 Animals that eat plants are a common sight, but plants eating animals? Well, there is the Venus fly trap. Then there are all those plants in fantasy and science fiction movies. In real life, though, it is rare that we hear about flesh-eating plants.

British botanists Alastair Robinson and Stewart McPherson headed over to the Philippine island of Palawan in 2007 to check out a pitcher plant they heard about from some missionaries. They discovered the plant in Mount Victoria, and published the report earlier this year in the Botanical Journal of Linnean Society.

The plant has been named Nepenthes attenboroughii, in honor of Sir David, the wildlife broadcaster. To this, Sir David replied:

“I was contacted by the team shortly after the discovery and they asked if they could name it after me. I was delighted and told them, ‘Thank you very much’. I’m absolutely flattered. This is a remarkable species the largest of its kind. I’m told it can catch rats then eat them with its digestive enzymes. It’s certainly capable of that.”

Indeed, the pitcher plant is unique in so many ways. More than catching flies and other small insects, it can devour rats! The botanists describe the plant as “immediately distinguishable from other Nepenthes by its great dimensions and trumpet-shaped lower and upper pitchers.” It is also unique in that it is the only member of its genus that “lives” at such a high elevation.

Can you imagine just how much more there is left to discover in the wild?