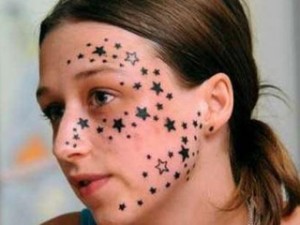 …and gets 56 stars for it. The story is that Kimberley Vlaeminck, an 18-year-old Belgian, went to a tattoo parlor to get stars on her face. According to her, she asked the tattoo artist, Rouslan Toumaniantz, to put three stars near her eyes. As the procedure progressed, she said that she fell asleep. She only woke up when she felt a pain in her nose as the tattoo artist started adding stars there. BBC quotes her as saying: “I woke up when he was starting to tattoo my nose… I counted 56 stars, it is frightening.”

However, according to the tattoo artist, she knew exactly what was going on. He said that she ordered stars – and lots of them, it seems – all over her face and that she got exactly what she asked for. He also disputes the teenager’s claim that he probably misunderstood her instructions. Toumaniantz says ‘She was awake and looked in the mirror several times as the procedure was being done. She agreed, but when her father saw it, the trouble started.”