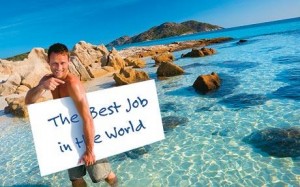 It was not long ago that we heard of the “best job in the world.” Sandy beaches –among the best in the world – free housing, blogging, fish feeding, and the works; these are the things that the winner will have to face for six months. No wonder that the server of the organizers got swamped and crashed in the days following the announcement!

This time, they have a different sort of announcement: the winner of the contest!

Ben Southall, 34, is the lucky guy who won. He is a British charity fundraiser who was part of the 16 finalists who entered video clips to get the chance to live in paradise for half a year. And how does the winner feel about this? He is quoted as saying:

To go away now as the island caretaker for Tourism Queensland and the Great Barrier Reef is an extreme honor. I hope I can fill the boots as much as everybody is expecting, my swimming hopefully is up to standard and I look forward to all of the new roles and the responsibilities that the task involves.

Starting July 1, Southall would have the chance to “fill the boots.” He will not be alone in the island, however, as his Canadian girlfriend has been allowed to join him. All I can say is that these two are perhaps the luckiest people in the world right now.

As for the tourism department of Queensland? They are hoping that this stunt will result in dollars – lots of it – spent in tourism in the area.