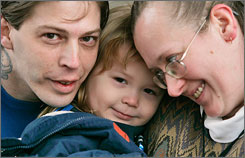 Who would name his kid Adolf Hitler? Heath and Deborah Campbell of Hunterdon County, New Jersey would – and did. Their son, Adolf Hitler Campbell, celebrated his 3rd birthday and his mom ordered a birthday cake from ShopRite for the event. Everything was routine and going on well until the ShopRite employee asked the mother to spell out the name to be inscribed on the cake. The employee then called her supervisor, who informed Mrs. Campbell that they had to deny her request.

The supermarket, by way of spokeswoman Karen Meleta states “We reserve the right not to print anything on the cake that we deem to be inappropriate. We considered this inappropriate.” Apparently, the parents have made the same request two years in a row and have been denied as well.

This incident has been much publicized and has gotten a lot of attention, especially on the Internet. What does the father have to say about the whole thing? USA Today writes:

Heath Campbell said he named his son after Adolf Hitler because he liked the name and because “no one else in the world would have that name.”

The Campbells’ two other children are named JoyceLynn Aryan Nation Campbell, who turns 2 in a few months, and Honszlynn Hinler Jeannie Campbell, who will be 1 in April.

Campbell said he was raised not to avoid people of other races but not to mix with them socially or romantically. He added he would try to raise his children differently.

“Say he grows up and hangs out with black people. That’s fine, I don’t really care,” he said. “That’s his choice.”

Oh, they eventually got him a cake – from Wal-mart, no less.