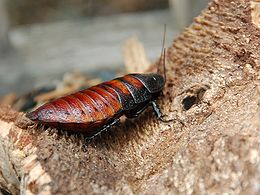 No one in his right mind would do this, right? Well, think again! This guy from Lansing, Michigan wanted his 15 minutes of fame, so he stuffed these icky creatures into his mouth.

“also known as the hissing roach or simply hisser, is one of the largest species of cockroach, reaching 2–3 inches (5-8cm) at maturity. They are from the island of Madagascar off the African coast, where they can be found in rotting logs.

Unlike most cockroaches, they are wingless. They are excellent climbers and can scale smooth glass.”

So Sean Murphy got 16 of some of the biggest roaches in the world! He said that each of the roaches were at the very least, 2 ½ inches long. He initially tried for 12 roaches, but he just kept adding one more until he got all 16 in. While the feat has been documented, Guinness says that they still have to verify Murphy’s stunt. Until that has been done, amazing (and disgusting) as it may be, he is not a world record holder yet. He remains undaunted, though, and says that next year, he will be going for 20 roaches in his mouth – alive, hissing, and all!