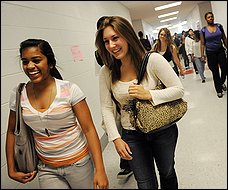 When you were in school, how often did you miss classes? If you were anything like me, you would probably have had a couple of weeks or so missed every school year. But dig this, Stefanie Zaner is only 18 years old but she is going on her 2,340th straight day of public school!

This girl has been dubbed the Iron Kid as in her 13 years of going to school, she has never once been absent. She has not gone missing due to a cold, a fever, or any other ailment. Neither has she been absent for a vacation, a trip, or anything else! Well, she went on a school trip to Shanghai for her marching band but prior to that, she got a written letter from the principal that the trip would not be counted as an absence.

As you may already know, this is quite a feat for any student. Perfect attendance even for a single school year is not that easy to achieve, especially in these days when all sorts of viruses and illnesses abound.

So what factors contributed to Stefanie’s excellent performance? For one, she said that she never really intended on making this record. It just sort of happened. I guess she has Darnestown Elementary School principal, Larry Chep, to thank as he gave out awards to those who had perfect attendance for each school year. This got Stefanie started out.

And mind you, all these years, she was not only present in school but she has gotten straight As as well!